Practical Steps to Respond to Islamophobia 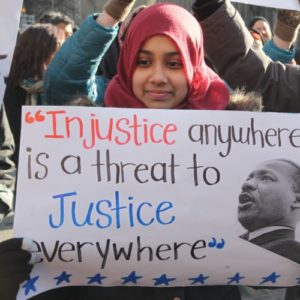 Building on the bias and institutional racism toward Muslims and other groups, the Islamophobia Industry is engaging in a calculated and effective dehumanization campaign of our American Muslim neighbors. Many Christian Pastors, out of Christian white supremacy, are repeating their messaging, building unity against a demonized group. Many politicians use fear and scapegoating to gain voters in anxious and uncertain times. Others minimize white supremacy and apply collective blame to all Muslims for the actions of an unfaithful few. Legislators propose anti-Muslim legislation, passed in 14 states. Policies and laws of our nation such as the Muslim Ban enshrine Islamophobia – giving the fearful and the haters a sense of legitimacy and breaking the equal protection under the law written in the 14th Amendment.

All of this is a part of a literally deadly cycle.

Dehumanization is always about one thing: preparing a population for violence against a minority group.

I respond that there is more than one kind of naiveté.

There is the naiveté of fear. Fear is a good thing. It keeps us alive. We are wired to pay attention to that which is dangerous to our lives. But our capacity for fear can become deadly. In the last century 262 million people were killed in genocide – in each case many well intentioned people were convinced through dehumanization and fear to do the killing.

There is another naiveté, however. This is the naiveté of passivity. In each of these genocides the vast majority of the population stood by passively. For some of these, the dehumanization made them willing to stand silent. For others, denial served as a shield and protected them from awareness of what was happening. In classic Abrahamic thought, we are responsible not only for what we do, but what we fail to do in loving our neighbors.

We must not let fear or passivity rule us. We don’t have to dedicate your entire life to counter Islamophobia, but rather join with larger movements to help create a more peaceful world.

First: Please sign on to support legislation in congress to repeal the Muslim Ban and stop other such bans from happening in the future to other groups. Please do so before Friday, March 29.
You can review and sign on to the letter using this form.

Second: Click here to see the 12 actions steps our Muslim neighbors are asking us to consider.